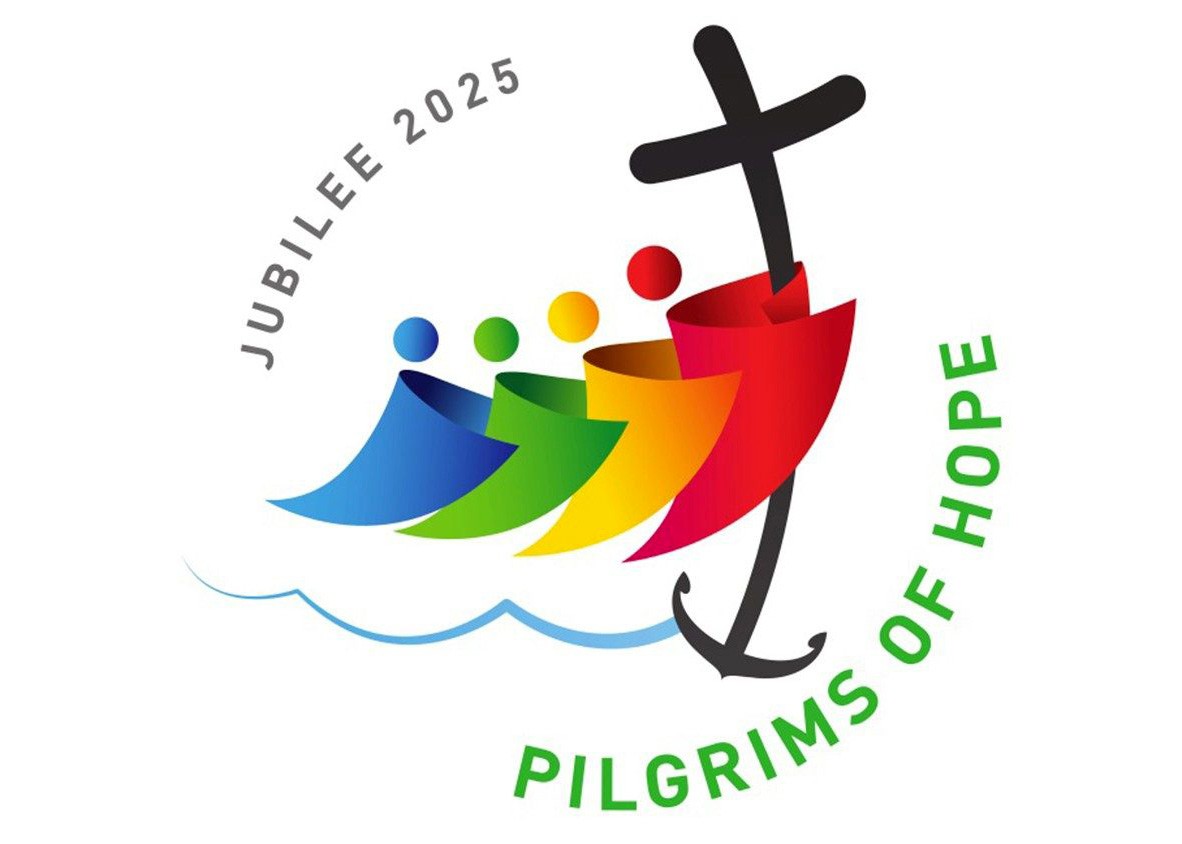 The Vatican on Tuesday, June 28, unveiled the official logo of the upcoming Jubilee Year in 2025 with the theme “Pilgrims of Hope.”

A Vatican press release described the logo as “four stylized figures to indicate all of humanity from the four corners of the earth.”

“They are each embracing another, indicating the solidarity and brotherhood that must unite peoples,” it read.

“It should be noted that the first figure is clinging to the cross. The underlying waves are choppy to indicate that the pilgrimage of life is not always on calm waters.”

“Oftentimes personal circumstances and world events call for a greater sense of hope. This is why the lower part of the cross is elongated, turning into an anchor, which dominates the movement of the waves. As is well known, the anchor has often been used as a metaphor for hope,” read the Vatican statement.

“The cross is not static,” said Archbishop Rino Fisichella, pro-prefect of the Dicastery for Evangelization, during a media briefing.

A jubilee is a Holy Year of grace and pilgrimage in the Catholic Church, which typically takes place every 25 years.

Archbishop Fisichella said there were 294 entries from 48 countries that were entered in the logo competition. Participants ranged in age from six to 83 years old.

“In fact, many were hand-made drawings by children from all over the world, and it was truly moving to review these drawings that were the fruit of imagination and simple faith,” said the archbishop.

A panel narrowed the selection to three projects, which were presented to Pope Francis, who chose the logo designed by Italian Giacomo Travisani.

The logo may be freely used by bishops’ conferences and Catholic communities for pastoral reasons, said Archbishop Fisichella, adding that commercial use is prohibited by a copyright maintained and managed by the Dicastery for Evangelization.

He said the official website of the 2025 Jubilee Year will launch after the summer.

The Catholic Church’s last Great Jubilee was held in 2000 with the motto “Christ Yesterday, Today, Forever.”

In 2015, Pope Francis called for an extraordinary Jubilee, a Holy Year of Mercy.

Archbishop Fisichella said the year before the Jubilee, 2024, will be dedicated to prayer in preparation of the Holy Year, while 2023 will be focused on promoting the major documents of the Second Vatican Council.

“The year 2023 will be devoted to revisiting the fundamental topics of the four Council Constitutions so that the Church can breathe anew the profound and timely teaching produced by Vatican II, whose 60th anniversary will be celebrated on October 11,” he said.