LiCAS.news | Licas NewsLIGHT OF CATHOLICS IN ASIA
Facebook
Instagram
Twitter
More
Home Church & Asia Why the next bishop of Hong Kong has a giraffe in his...

On the coat of arms, the giraffe’s long neck extends out beyond the bounds of the shield 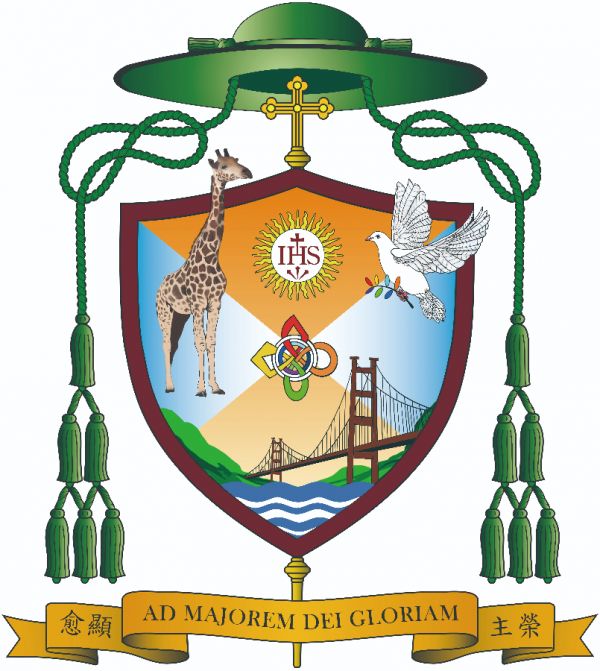 Hong Kong is famous for having long been one of the most densely populated urban areas in the world. It is one of the last places on earth one would expect to find a giraffe.

Yet for the incoming bishop of Hong Kong, the animal from the African savannah has significant symbolic value, so much so that he decided to feature the tallest living animal in his episcopal coat of arms.

Bishop-elect Stephen Chow Sau-yan, the former head of the Jesuits’ Chinese province, is scheduled to be consecrated as a bishop in the city’s Cathedral of the Immaculate Conception on Dec. 4.

Ahead of his episcopal ordination, the Diocese of Hong Kong shared an image of the incoming bishop’s coat of arms with CNA, along with an explanation of the crest that Bishop-elect Chow provided to the local diocesan newspaper of some of its less traditional imagery.

One of the coat of arms’ most notable features is not only the inclusion of a giraffe in itself, but that the animal’s long neck extends out beyond the bounds of the shield.

For Bishop-elect Chow, this long neck symbolizes being able to see the big picture.

“Short-sightedness can cause fear in oneself. Looking with vision can help one calm down,” the bishop-elect told the Sunday Examiner.

Bishop-elect Chow also noted that giraffes are known for having big hearts to pump enough blood to their heads, and can therefore be considered a symbol of generosity. A giraffe’s heart can weigh up to 25 pounds and has a thick left ventricle.

The Jesuit priest, who formerly served as a teacher at Wan Yan College, said that this idea of a giraffe being a symbol of having a generous heart and a broad perspective was something that he shared with his students.

“I received some pictures of giraffes from students which were posted in my office in Wan Yan College,” he said.

The tradition of Catholic bishops and popes having a coat of arms dates back to the heraldic tradition of the Middle Ages.

Traditionally each non-papal shield is topped with a galero hat above a cross and surrounded by tassels — green for bishops and red for cardinals — with a scroll containing the bishop’s motto beneath.

Along with the giraffe, Bishop-elect Chow’s shield also includes some traditional Christian imagery, including a dove, a biblical symbol of the Holy Spirit, and a sun containing the IHS monogram for the name of Christ, which is the symbol of the Jesuit order. Pope Francis also has this symbol on his episcopal crest.

Bishop-elect Chow’s episcopal motto, “Ad Majorem Dei Gloriam” (“For the greater glory of God”), is another nod to his Jesuit identity.

In the shield’s center is a multicolored Celtic knot, which the diocese said was a symbol of “unity in plurality.”

Bishop-elect Chow described the inclusion of the bridge as a symbol of the mission of the Church to form a bridge for different parties to meet each other.

“The bridge itself is for people to step on. Without people walking, the bridge is not useful anymore,” he said.

Commentary from the Asia News outlet noted the selection of the Tsing-Ma Bridge over the city’s famous Hong Kong-Zhuhai-Macau Bridge, the world’s longest cross-sea bridge, which was built from 2009 to 2018 to connect Hong Kong and Macau with mainland China.

The Tsing-Ma Bridge, in contrast, connects two islands within Hong Kong territory itself. Asia News suggested that this could signify “bridge-building” within Hong Kong’s internal divisions.

Like the rest of Hong Kong’s population, the city’s Catholic community has faced challenges and division in the wake of the government crackdown on pro-democracy protests of a controversial extradition law in 2019 and against the local government’s decision to push a national security law in 2020.

Bishop-elect Chow said at a press conference the day after his appointment last May that he thought that “listening and empathy” were very important to heal divisions, adding that “unity is not the same as uniformity.”

“I really have no big plan, grand plan of how to unify, but I do believe there is a God, and God wants us to be united,” Bishop-elect Chow said.