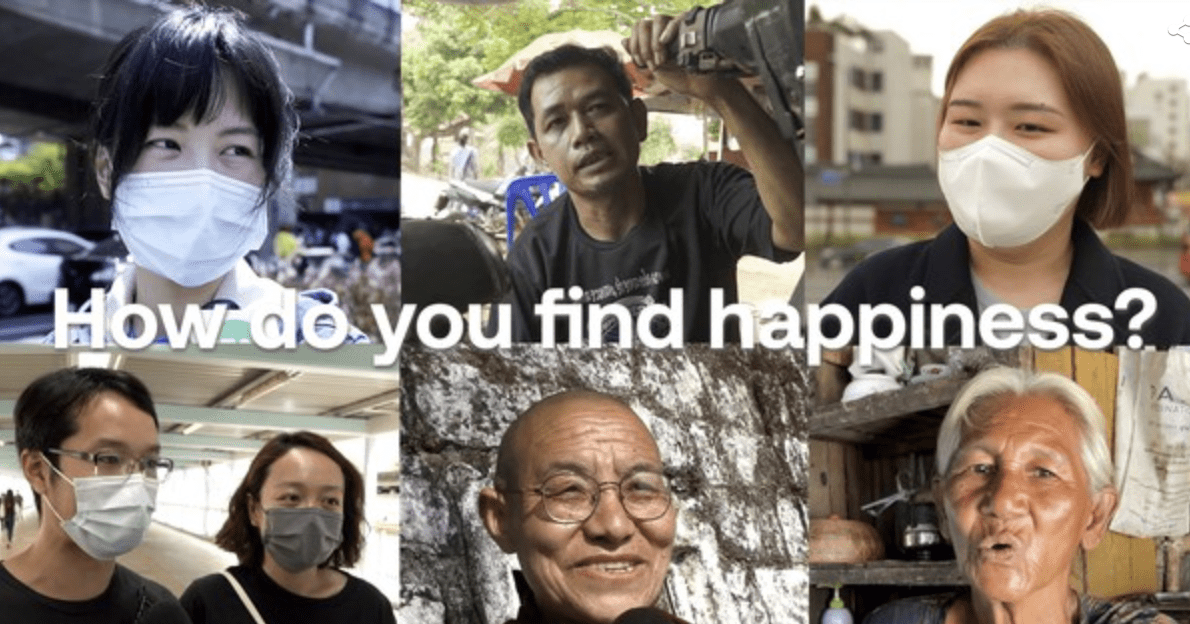 A world struggling to shake off the coronavirus pandemic that has killed millions and clobbered economies – and now fearful about Russia’s brutal war in Ukraine – marked the International Day of Happiness Sunday with many people wondering what to be happy about.

To observe the now-10-year-old UN holiday, RFA asked urban residents across the Asian continent, from Seoul to Yangon to the seat of Tibet’s government in exile in India, what makes them happy.

In Taiwan, whose rank of 26 made it the happiest East Asian region, one resident of that democratic island’s largest city looked to family for contentment.

“Happiness comes from family. We are happy when kids and parents are around. Life has to go on. Happiness is very necessary,” said a resident of Taipei.

In Hong Kong, a special autonomous region of China that has experienced a dramatic cut in civil liberties since Beijing imposed a harsh national security law in mid-2020, resident Mr. Yan finds joy in the cinema.

“I think we all live in the moment and should do our best. If I have things to do, I do them. When I’m off, I watch movies at home. I do something I like to do,” he told RFA. Hong Kong is ranked 81 on the happiness index.

“In the past, everyone had dinner at the office and had appointments with friends. Now that we are together all the time, we are much closer than in the past,” he told RFA.

“Maybe this is happiness,” added Lee.

India, which ranks 136 out of 146 countries surveyed for 2022, is home to a large community of Tibetans who fled the Chinese annexation of the Himalayan region seven decades ago.

“For me, ultimate happiness is when I can engage myself in helping all the sentient beings in the world. It is more important than temporary happiness,” Woesar told RFA.

“So, Buddha directs us to the ultimate happiness that is achieved when a person can find enlightenment, otherwise it is all temporary happiness.”

Employment are on the minds of many people in Southeast Asia, which has suffered heavy economic fallout from the coronavirus pandemic and is still struggling to contain outbreaks.

“Before the pandemic, people had fun by going out, partying or socializing with friends and others. Now, I’m graduating and feeling discouraged quite a bit because there are no jobs available, nobody is hiring,” said a student who is about the graduate from a college in the Lao capital Vientiane.

“Despite this hard time, I still find happiness by visiting nature, chatting online with friends, talking on the phone with my family back home, listening to music, doing more research, writing essays or reading books,” he told RFA from Laos, ranked 95 on the happiness index.

‘I can’t even imagine’

A 28-year-old Lao woman who lives with her family in the Thai capital Bangkok said she has been unemployed for two years.

“I’m a housewife living with my husband, but I’m happy being at home; the most important happiness for me is happy marriage and looking after my husband, my children and my parents back home in Laos,” she told RFA.

Cambodia ranks a lowly 114th and some Cambodians blame this lack of happiness to a five-year-old political crisis that a filled jails with activists and opposition figures.

“Even if my husband were to be released, there would still be no happiness, because Cambodia doesn’t have a real pluralism or democracy,” said Prum Chantha, wife of a jailed opposition politician.

“To me, happiness will come when Cambodia has a good leader, respects democratic principles, has free and fair elections and respects human rights,” she told RFA.

A scavenger in the Cambodian capital Phnom Penh, who picks trash for items to sell, “having a decent living, sending kids to schools” represents happiness.

“I don’t want my kids to be scavengers,” she told RFA.

More than a year after Myanmar’s military overthrew the country’s popular elected government in a February 2020 coup and plunged the country into chaos and violence, happiness is hard to find for street vendor Kyi Kyi Myint.

“If I were well-to-do and my family members were still around, I might be happy. But now, since they are all gone, I can’t even imagine what happiness is,” he told RFA.

“Every day, I have to figure out what to do to pay my living expenses. Since I live in squalor, I worry all the time what will happen to me.”

Pope Francis: Put your trust in God and his care for...